Landscape history can be seen in ‘Marie Antoinette’ movie

Note: This is an edited reprint of a newspaper article I wrote in Nov. 2006, shortly after this movie was released.

Landscape history can be seen on the big screen

My husband and I went to see “Marie Antoinette” last weekend. The movie had exquisite costumes and an engaging story but also was rich in period landscapes – or at least one landscape: Versailles. I have not been to Versailles, but I have read quite a bit about the iconic gardens. I thought I’d share some of the trivia that makes watching this movie (and these beautiful gardens) more interesting. Most of the garden scenes are in the last part of the movie.

In 1661, France’s financial secretary held a lavish celebration at his chateau and gardens at Vaux-le-Vicomte. Among the guests enjoying feasts, a play, fireworks and music was 23-year-old King Louis XIV. At this time, gardens were seen as pleasure grounds and places to entertain guests. One garden historian also said this was when “garden design in France discovered a style of its own.” This formal French garden design consisted of strong geometry, elaborate parterres of pruned hedges, broad walkways, statues, elaborate fountains and woodlands. The story goes that Louis was furious that an ostentatious finance minister upstaged him with a chateau and gardens better than anything he had. Another says he was already being sabotaged by a rival who had the King’s ear. Records state that the minister was arrested within three weeks and stayed imprisoned for the rest of his life.

The king then had the designer of the gardens, Andre LeNotre, start work on transforming the grounds of his modest hunting lodge at Versailles into the elaborate gardens shown in “Marie Antoinette”. This project took six years to design and the remaining five decades of LeNotre’s life to fine-tune.

One of LeNotre’s interests was hydraulics. It may seem the fountains are just turned each morning, but remember the electric pump had not been invented. First, waterwheels and pumps brought water uphill from the River Seine to aqueducts, then into tanks and reservoirs miles away. Water was released, run through pipes by gravity, then constricted into smaller pipes to create pressure. The shape of the spout determined the direction and effects of water displays. Thirty-two of Versailles’ pools include hydraulic effects. When the King was coming down the road, fountain guards would whistle so servants could release the water and get the fountains running. The French, who lived in relatively flat terrain, had to work hard to create great fountains. Nobody could have them run all day, every day. So the fountains were also designed as great sculptural elements that looked good even when the water wasn’t running.

When the fountains did run, Louis XIV wanted drama. The Neptune fountain has 58 spouts. Much of the water ended up in a cross-shaped canal, one mile long and two-thirds of a mile wide. To the visitor it appeared endless, a symbol of the immense power of Louis XIV.

Louis XIV was so involved in the gardens that he wrote a guidebook on how they should be viewed. And viewed they were: From 3,000 to 10,000 people may have been in Versailles on any day. Although photos of Versailles usually show one huge chateau behind dramatic gardens, it actually was a city in itself, with quarters for guests, staff and horses, plus areas to raise food to feed everyone. Hunts would take place in the surrounding woods of the 15,000-acre estate.

After Louis XVI and Marie Antoinette are crowned in the film (after 59 years of Louis XV’s reign), they walk outside, where wooden ships fire cannons in a mock battle. No, the French Royal Navy has not sailed in to help celebrate; these ships are in the canal for the sole purpose of creating amusing mock battles. A 1710 illustration in one of my books shows four sailing ships. Talk about a pricey water feature.

Note: When I watched this again in 2020, I remembered this sketch that I had seen in the Richard Russell Library on the UGA Campus. Marie Antoinette wears this or a similar headpiece in the movie.

Another scene shows Louis XVI with an elephant. The Menagerie was started in one of the earliest stages of Versailles’ redevelopment, perhaps as early as 1662. It was a working farm that provided butter, etc., designed to also serve as a place to view country life and animals. At first it contained mainly farm animals, with some fish and exotic birds. A central plaza was lined with gates into several animal enclosures. When the Grand Canal was created a few years later, boat rides to the Menagerie became popular with guests. Exotic animals, such as an elephant and rhinoceros, were added in the early 18th century.

In the 1780s Louis XVI did build a “little” getaway for Marie Antoinette, a bucolic lakeside village in a Normandy style that previewed a future landscape style mimicking romantic country scenes.

It’s hard to imagine the magnitude of these gardens and life under the reign of people who ruled nations in their early 20s. We have a better supply of food, indoor plumbing, air conditioning, lots more books and much more comfortable clothing. I think I’d rather stay in this century.

Loves Notes from the Garden 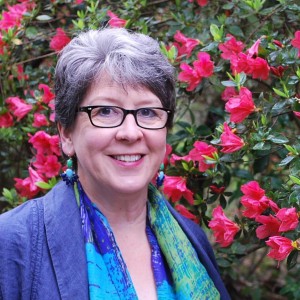 Sharing information about gardening and about garden destinations and events. Creates Love Notes From the Garden - free, whimsical, informative, short notes emailed to you weekly. Garden writer, consultant and speaker based in Georgia, USA.